2015 was another solid year for the Hampton Rovers website with the refreshed site visited just under 60,000 times while over 150,000 pages were viewed.

In its 17th year, the Rovers website re-launched on the eve of the 2015 season with a slick new look and host of new or improved features. Over 28,000 individuals accessed the site throughout the year and the average time spent on the site was 2 minutes per visit.

While the number of people visiting the site remained steady, the number of sessions actually dropped 8% from the previous year. 2013 and 2014 were years of significant growth with the club, winning back-to-back Premierships. No finals campaign for the seniors and less junior match reports resulted in a slight dip in the past year.

The most popular day in 2015 was on August 28 when former AFL player Matthew Robbins announced his retirement from footy, on the eve of his final game for the Rovers. That day, 899 people visited the website with almost 1,700 pages viewed.

The growth of mobile continues and that was proved in 2015 where for the first time, mobile traffic was higher than desktop traffic with 45% accessing the Rovers site via a mobile device, 40% on a computer and 15% on a tablet device. The Rovers mobile site was re-launched in 2014 and improved throughout 2015 to automatically send users on mobile devices through to it, providing an improved viewing experience. The iPhone was well and truly the most popular mobile device, accounting for 60% of all traffic.

In terms of people finding the Rovers website, 40% of visits came via search, 31% links from other websites, 20% from directly typing in the URL and 9% from social media.

Outside of the homepage itself, the most popular pages were the senior live scores, junior homepage, senior homepage, followed by fixtures & results.

The Rovers social media channels continue to be strong. On Facebook, the club finished the year with 936 ‘likes’ – an increase of 10%. Some posts generated huge reach, including the Martyn being replaced by Owen Lalor post (8,831), U16 Premiership (6,454), Owen Lalor era ready to go (7,708) while the aerial video of Boss James Reserve reached 4,744 people and was viewed almost 2,500 times. The club also finished 2015 with 735 Twitter followers and 432 Instagram followers.

A feature of the new site in 2015 was Rovers Video which integrated YouTube. There were 3,327 video views, equating to a total of 9,599 minutes watched – an average of 2:53 per video view.

The Rovers website continues to be the benchmark in local footy and will take further steps forward in 2016.  #GOROVERS 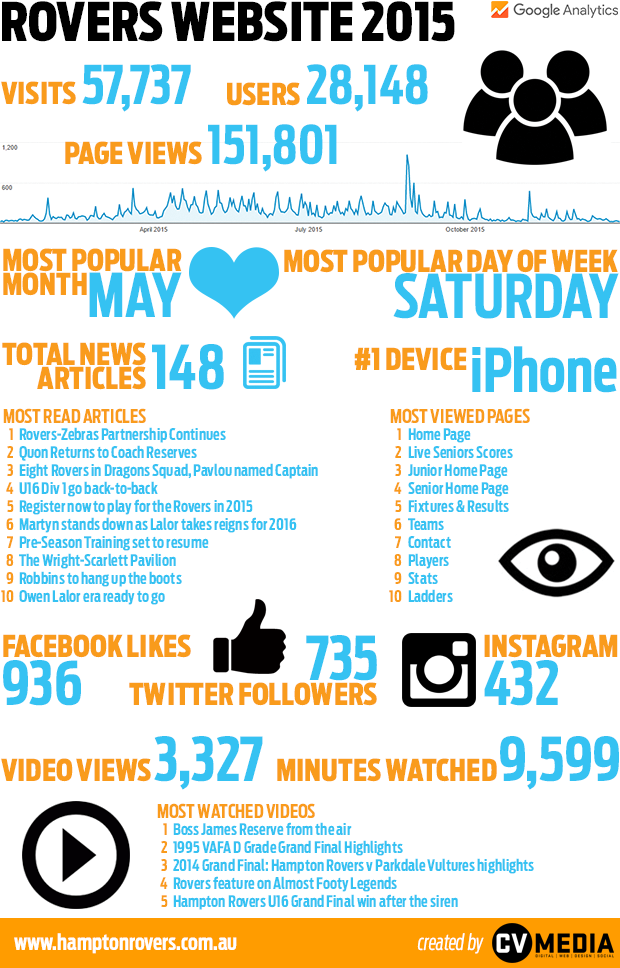